Plan Now for World AIDS Day (Dec 1)
World AIDS Day is observed worldwide on December 1 of each year. Dedicated to AIDS awareness and education, this day is supported by events worldwide bringing AIDS challenges and awareness into the forefront of the news. Take advantage of this annual opportunity to promote AIDS awareness. First conceived in 1987, each year World AIDS Day theme is now chosen by the World AIDS Campaign's Global Steering Committee after extensive consultation with people, organizations and government agencies involved in the prevention and treatment of HIV/AIDS.
Led by the World AIDS Campaign organization, the theme for World AIDS Day 2015 is ”Getting to zero.” Zero New HIV Infections. Zero Discrimination and Zero AIDS-related deaths.

We got great feedback at USCA on ID Moments, the Glycerin Free, Paraben Free lubricant by ID Lubricants. Its their sensitive skin formula that everyone loves, especially in the 12g tube. This small tube is purse friendly, and has a resealable cap.
Posted by Unknown at 10:57 AM

Come Visit us at the U.S. Conference on AIDS!!

We will have Brand New Educational Games Available and will be handing out samples of some our latest products.
Here are some things you have to look forward to: 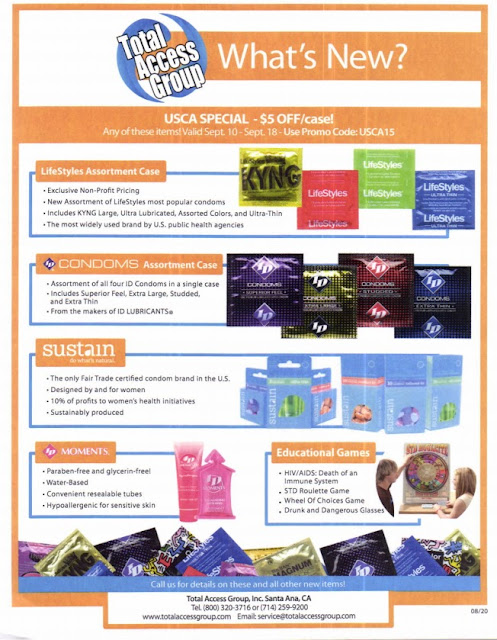 While this was posted on TeenSource.org, these helpful tips are great for students of any age.

1. Flossing or Brushing After Oral Sex

Never floss or brush your teeth after oral sex. Contrary to popular belief, rushing to clean your mouth after oral sex will not help you decrease the chances for contracting an STD. Flossing or brushing actually does the opposite; it can irritate your gums or create small cuts that might increase your exposure to an infection. If you are afraid of contracting an STD through oral sex, use a condom or dental dam.

Using lube is good, but using an oil-based lube with a condom is bad. Oil-based lubes weaken the strength of latex and increase the chances that a condom will break. It is best to use water-based or silicon-based lube. You can find out if a lube is oil-based or water-based by checking the label.

Sex tips in magazines lead you to believe that you can become a sex god or goddess just by using 10 simple tips, but it’s not true. To know what turns a guy or girl on you have to know them and ask what they like. Just because a magazine tells you that a guy or girl likes to be touched or kissed in a certain way doesn’t mean it’s true. It is better to find out and ask your partner what he or she likes, you should know more about what your partner likes and doesn’t like than a magazine does.

If you think you might come close to doing any type of sexual activity with another person, or are planning on it, always be prepared. There is nothing more disappointing than wanting to get intimate and then not being able to because you don’t have the proper tools. If you are thinking about getting intimate with someone, make sure you have whatever you may need-- a condom, dental dam, lube, etc. and be certain you are ready.

5. Not Being Mentally Prepared

Sex is just as much mental as it is physical, you need to be just as mentally prepared as you are physically. Sayings like, “Your brain is the biggest sex organ you have” and “Sex is 90% mental and 10% physical,” are said for a reason. If you have any lingering doubts about having sex, go with your instinct and hold off until you are ready. Also be sure that you and your partner are equally prepared.

There's an inconspicuous metal box mounted on the wall of the gym at San Francisco County Jail No. 4.
When Kate Monico Klein turns a knob, the machine releases a condom in a small cardboard packet. Machines like this one — dispensing free condoms — are installed in all of the county's male jails.
"We set [the machine] off to the side, so that people would have a minor amount of privacy," explains Monico Klein, director of HIV services for Jail Health, a division of the county's health department.
San Francisco has been distributing condoms to inmates in county jails for decades, but a new California law requires condoms to be made available to all state prisoners. California is the second state after Vermont to do so, even though sex between prisoners is unlawful here.
"I get about 10 of them every time," says Jail No. 4 inmate Robert Greve, with a laugh. He has been in and out of prison in several states, but this is the first time Greve has been locked up somewhere that provided condoms.
"Condoms are very good to have around, I think, you know? Because it's a lifesaving device," he says. "A lot of people don't care about their health, I think."
But even though condoms are available inside the jail, Greve says deputies still enforce rules against inmates having sex.
"They freak out about it — like, I've seen them catch people in bed together and they're like, 'Hey, what are you doing?!' "
The Centers for Disease Control and Prevention estimates that 1 in 7 people living with HIV passes through correctional facilities each year."We still have the need of sex, and believe it or not the straight men, while they're in custody, they do have sexual activity with other males," Angel Ramirez says. "It's sad, because I heard from other inmates how they ... get infected with HIV while in custody."Inmate Rene Angel Ramirez, who is gay and HIV-positive, says condoms keep his partners safer and protect him from other diseases like gonorrhea, chlamydia or hepatitis C.
Back in the 1980s, San Francisco became one of the first places in the country to hand out condoms to inmates in the county jail. But three decades later, it's still one of only a handful of prison and jails in the country that do so.
Often that's for a simple reason: Sex in prison or jails is against the rules in every state, even if it's consensual. And in some states, including California, it's actually a crime.
Still, San Francisco Sheriff Ross Mirkarimi says he supports the condom distribution program if it helps slow the spread of HIV and other sexually transmitted diseases.
"The law is the law," he says. "But should this behavior occur ... there is a safer way. We want people to be protected — and we insist on it, that they be protected."
But not all deputies are comfortable with condoms being available.
"I could not report to you that there still is buy-in from the uniformed staff," says Matthew Freeman, San Francisco's chief deputy sheriff. There are reasons that even consensual sex is prohibited in jail, he says.
"We know from our experiences running and managing these county jails that even consensual sexual activity amongst inmates can lead to very real problems," he says, like disharmony in the jail, which the sheriff's department says is a potential security risk.
In the early days, deputies also were concerned that condoms could be used as weapons or to smuggle drugs. And while Monico Klein of the public health department says that hasn't happened, she adds that condoms have been put to some more unusual uses.
"We found that, among other things, the prisoners take the condoms and they use them as hair ties, they use them as pillows," she says. "One of the deputies told me that they blow them up and use them as balloons."
And although that initially bothered some people, she says, "one of the things we realized is that it is another way of destigmatizing HIV."
California's state prison system now has five years to come up with a plan to provide condoms in all of its facilities.
Posted by Unknown at 9:00 AM 0 comments

The Story Behind Okamoto